The second most deadly animal in the world is the human; the first is the mosquito. Different species of mosquitoes transmit parasitic infections, such as Zika virus, West Nile virus, Chikungunya virus, dengue, and malaria. The Anopheles mosquito carries malaria and in the 20th and 21st century the majority of these cases have been concentrated in the Global South – over 40% of the global population live in malaria-endemic areas. This is due to the optimal combination of high temperatures and humidity that allows the mosquito population to multiply. Mal – Aria translated from Latin directly means bad air, indicating the conditions necessary for mosquito-transmitted diseases.

Countries with high malaria risk in the Global South, particularly in Sub-Saharan Africa, India and Pakistan, have been most impacted by climate change. The impacts of climate change have put pressure on the healthcare systems and economy. Furthermore, these states have less infrastructure to address and prevent the effects of climate change and epidemics such as these. As global warming crosses a temperature threshold, intensifying extreme weather and warming in regions already hard-hit by mosquito-borne illnesses, the number of these cases is  likely to increase. However, the rates of cases of mosquito-transmitted diseases, particularly malaria, have decreased as the international community has invested in reducing the malaria cases across multiple countries.

Map of countries with populations at-risk of Malaria: 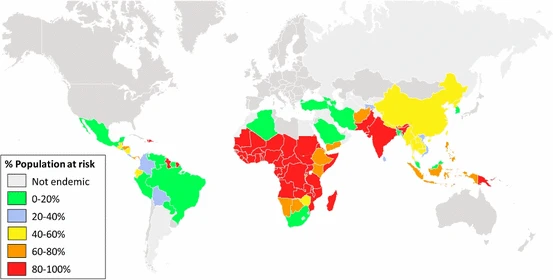 UNICEF’s ‘Target 3.3’ puts forward the following goal: By 2030, end the epidemics of AIDS, tuberculosis, malaria and neglected tropical diseases and combat hepatitis, water-borne diseases and other communicable diseases.  However, McKinsey has predicted that by 2050, most of Africa will be experiencing at least a 2.6 – 3.0 Celsius temperature increase with the potential to reach 3.5 Celsius increase in northern and southern parts of Africa. Furthermore, global warming is causing increased humidity.  Warm air can carry more water vapor, and increased sea and land temperatures are releasing more water through evaporation. Heat, humidity levels, and standing water cultivate the ideal habitat for mosquitoes. Thus, increases in these levels contributes to the increase in waterborne-diseases, malaria included. Much of this has been exacerbated by ‘climate variation’ which includes mass agriculture or mining projects that affect local climate and lead to an intensification of extreme weather. Governments should consider how to mitigate the spread of such diseases as climate change worsens. The efforts to combat malaria and related diseases through humanitarian strategies have been commendable and have resulted in a considerable drop in cases. Between 2000 to 2015, the malaria-related death toll fell by approximately 40 percent from 896,000 deaths to 562,000 deaths. However, due to  the diversion of healthcare and humanitarian attention during the COVID-19 pandemic and the worsening climate change situation, this number has risen since 2020 to approximately 627,000 deaths. Malaria is still a significant security threat to humanity and will continue to be so due to the deteriorating trajectory of climate change.

The consequences of climate change, including global warming, natural disasters, and increasing resource scarcity, have been visible for more than a century now. The aftermath of natural disasters – disease, famine, droughts, and other effects – are visible everywhere. The most recent monsoon floods in the Sindh Province of Pakistan in the summer of 2022 have displaced at least 500,000 people. Disease goes hand in hand with displacement; the conditions of traveling, temporary shelter, refugee camps or other sites with a lack of infrastructure to protect people in hot and humid climates facilitate the spread of pathogens. There were at least 4,000 confirmed cases of malaria in Sindh province since September 2022, to which Pakistani authorities do not have the resources to respond to or aid. Moreover, these waterborne-diseases cause fever-like symptoms and respiratory stress and have the potential to lead to seizures and circulatory collapse. If left untreated, these symptoms can create long term health problems, such as anaemia and jaundice, both of which can render a person unable to work, move or survive in an environment for displaced people, particularly temporary shelters and refugee camps. Not to mention, infected individuals may retain some immunity after surviving malaria but could still become infected a second time.

Given its impacts on human security,  a rise in malaria cases can have dire impacts on a state’s economy due to its repercussions on the labor force, lowering the productivity of their economies. According to the World Bank in 2001: ‘An estimated US $12 billion in economic revenue is lost annually in Africa because of malaria’.  Malaria’s effects reverberate through younger generations, as these types of diseases tend to affect children and pregnant women. Consequently, children in malaria-affected areas are more likely to have a higher child and infant mortality rate and a cumulative loss in hours in education. This will impact the upcoming generation of workers and diminish the state’s economy. Malaria-concentrated regions will impact international funding and by diverting aid for nations reliant on such income, as well as resource allocation prioritizing Malaria over other health security issues with the potential to have focus less on other fatal diseases. Diverting international attention away from malaria has a definite impact on charity and non-governmental work as less people or organizations are able to raise funds for such causes. This international support is pertinent to helping battle malaria cases. The Global Fund accounts for 63% of the international backing for malaria programs and as of June 2022 have invested more than $16.4 billion into humanitarian action against malaria.

Funding in the past twelve years has led to a significant decrease in the child mortality related to Malaria statistics as demonstrated in the Our World in Data figure below:

Transnational cooperation has made remarkable advances in sustainable malaria research. The World Health Organization, the World Bank, UNDP and UNICEF worked together on ‘The Roll Back Malaria program’. The four main components of this plan are increasing access to treatment, preventing malaria during pregnancy, reducing mosquito-human contact through the use of insecticide-treated bed nets, and timely action in malaria epidemics. Likewise, the Bill and Melinda Gates Foundation has contributed a total of $258.3 million for the development of the malaria vaccine, malaria medication innovation and delivery, and other methods of mosquito control, such as nets to Sub-Saharan African states in 2005. All of these initiatives have resulted in the introduction of Rapid Detection Tests (RDTs) in humanitarian aid initiatives, in schools and workplaces on the ground. Efforts to create a malaria vaccine have dated back to the 1960s, however, in 2022 the University of Oxford announced the creation of a malaria vaccine formula and a new manufacturing deal which could lead to more than 100 million doses a year and is expected to be rolled out in 2023. The malaria vaccine roll out scheme will counter malaria in a short space of time, creating additional long-term benefits: less strain on these malaria-affected countries’ healthcare systems, humanitarian sectors and economies in the Global South.

A significant amount of research and work has been done on how to counter malaria outbreaks. Even 1904 US Major Ronald Ross recognised that the standing water was the main cause of Panama’s malaria crisis, affecting around a sixth of Panama’s population at the time. From this formed the Panama Canal Plan that involved draining these standing water pools in rural Panama and other techniques to remove adult mosquitos. They managed to eradicate yellow fever and the malaria related-death cases dropped from approximately 16.21 per 1,000 in July 1906 to 2.58 per 1,000 in December 1909. New innovations around mosquito control are still in development today. The biotech firm Oxitec has genetically engineered a type of mosquito to prevent or at least reduce mosquito-borne diseases and in May 2021 they release this modified mosquito into the Florida Keys ecosystem. The observation period for this is still ongoing.

These mosquito population control initiatives and efforts to thwart the direct and indirect consequences of Malaria and other water-borne diseases have made significant progress in saving lives. However, as climate change worsens, we should be aware and proactive about how climate change impacts the resurgence and aggravation of diseases like Malaria. Considering this disease and its strain on the healthcare, humanitarian, and economic sectors in the Global South remains a crucial security threat – one that should not only be recognized nationally or regionally, but internationally.

View all posts by krcw64

This site uses Akismet to reduce spam. Learn how your comment data is processed.

Our peer-edited journal, published semiannually in print and online.